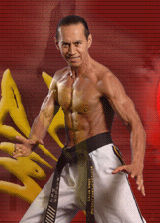 The 68-year-old man was arrested on November 7 for allegedly inappropriately touching girls at his karate dojo in contravention of the Child Protection Act.

Warrant Officer Balan Muthan said he could not give details of the case as it had been handed over to the Child Protection Unit.

Bow to your Sensei!

If he really did that, they have to put him in jail.

lol had to read this again... it's Rex Kwon Do! lol