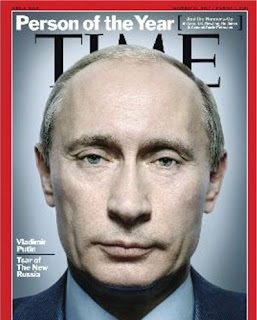 The overwhelming favourite in next year's Russian presidential elections told an election campaign meeting that he found the TV coverage immoral and blamed journalists for failing a basic ethics test.

"Almost the entire Gaddafi family was killed. His body was shown on all the world channels. You could not watch without disgust," news agencies quoted Putin as saying.

"What is that?" Putin exclaimed. "They show a bloodied man, wounded, still alive but getting beaten to death. And they splash that all over the screen."

Global disquiet has grown over how Gaddafi met his end at the hands of National Transitional Coalition fighters who hauled him out of a culvert where he was hiding following Nato air strike.

Mobile phone videos show him still alive at that point.

Russia had earlier condemned Nato for using its jets to attack the convoy Gaddafi was using to try and break through NTC troops that surrounded his hometown of Sirte on October 20.

But Putin had remained conspicuously silent over the death of a man Moscow had viewed until the start of the war as an ally who purchased Russian weaponry and provided access to his country's lucrative oil fields.

Russia's former spy and president between 2000 and 2008 notably avoided placing blame on the fighters for killing Gaddafi or on Nato for conducting its air strike.

"That is a separate subject," Putin noted.

He directed his anger instead on the media and appeared to encourage Russian media outlets - which used the same video grabs made available worldwide - to practice better self-censorship.

"There are millions of people watching, including children. And this is not some kind of animation. This is not fiction. These pictures are of real life," said Putin.

"People within the [journalistic] community should understand what they are doing better and bear some sort of moral responsibility," said Putin.

Russia television has for most of the post-Soviet era been filled with gory images ranging from close-ups of rebels killed in the North Caucasus to the bodies of people who died in regular road accidents.

That uncensored footage was especially popular in the 1990s but continued on for most of the past decade without the usual editing that accompanies such scenes on Western TV.

Putin's comments on the media are being particularly closely watched for indications of Russia's future course under a presidency that could potentially stretch to 2024.

The state won control of all the major television stations during the first Putin presidency and was heavily criticised by the West for using that control to keep opposition voices off the airwaves.

Putin said on Wednesday he felt that television journalists' moral obligations before their viewers came "before everything else".
Newer Post Older Post

I think it's good the coverage is released