Man jokes despite nail in brain 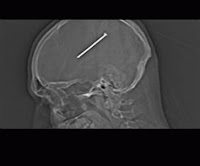 Illinois - Gail Glaenzer still can't believe that her fiancé unknowingly shot a nail into his skull, let alone that he posted a picture of the X-ray on Facebook during his ambulance ride between hospitals for surgery.

But she was joking about the circumstances on Friday, a day after doctors successfully removed the 8.25cm nail from Dante Autullo's brain.

"Dante says, 'I want it to make a necklace out of it'," Glaenzer said.

Glaenzer sat on Friday in the lobby of Advocate Christ Medical Centre, where Autullo, 32, was listed in fair condition in the hospital's intensive care unit. She was still trying to process just how lucky the father of her four children was.

"He feels good. He moved all his limbs, he's talking normal, he remembers everything," said Glaenzer, 33. "It's amazing, a miracle."

Autullo was in his workshop using the nail gun on Tuesday when it recoiled near his head, Glaenzer said.

He felt what he thought was the point of the gun hit his head. But what really happened was that when the gun came in contact with his head, the sensor recognised a flat surface and fired, she said.

"I looked at it when he got home, and it just looked like (his head) was cut open," she said.

With nothing to indicate that a nail had not simply "whizzed by his ear", as Autullo explained to her, she cleaned it with peroxide.

While there are pain-sensitive nerves on a person's skull, there aren't any within the brain itself. That's why he would have felt the nail strike the skull, but he wouldn't have felt it penetrate the brain.

Neither thought much about it, and Autullo went on with his day, even ploughing a bit of snow. But the next day when he awoke from a nap, feeling nauseated, Glaenzer sensed something was wrong and suggested they go to the hospital.

At first Autullo refused, but he relented after the two picked up their son at school on Wednesday evening.

A couple hours later an X-ray was taken, and there in the middle of his brain was a nail. Doctors told Autullo and Glaenzer that the nail came within millimetres from the part of the brain that controls motor function.

Hospital spokesperson Mike Maggio said the surgery took two hours, and the part of the skull that was removed for surgery was replaced with a titanium mesh. The surgeon didn't want to put that part of the skull back in place, fearing it might have been contaminated by the nail, he said.

Glaenzer said that while Autullo hasn't really talked about how scared he was about what might have happened, he did express a recognition about coming close to death.

"He was joking with me, (after surgery), 'We need to get the Discovery Channel up here to tape this'," she recalled him saying. "'I'm one of those medical miracles.'"
Newer Post Older Post

Whoa, that man is tough as nails, literally.

what an amazing story. he's lucky to be alive