Best student cities in the world 2012 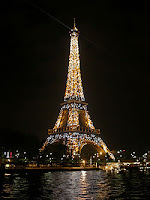 Paris has been ranked the best city in the world for students, according to a UK study, although some French undergraduates felt the results were wide of the mark.
Researchers at QS Best Student Cities looked at quality of life and affordability in terms of fees and living costs, as well as the number of institutions and their overall reputations among employers.
QS has been ranking individual universities since 2004, although this is the first time their researchers took the cities into account.
Here is the list of the 20 best ranked cities for students 2012 !
Newer Post Older Post