5:38 AM
Petar
2
A 100-year-old British Indian man who claims to be the world's oldest marathoner was all smiles after completing a 10km run at the Hong Kong marathon on Sunday. 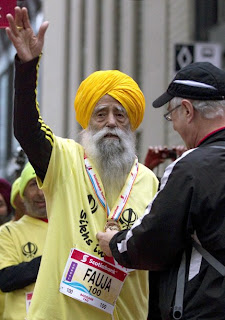 Born in 1911 and affectionately nicknamed the "Turbaned Torpedo", Fauja Singh finished the race in just over one hour and 34 minutes, organisers told AFP, raising HK$200 000 ($25 800) for the charity Seeing Is Believing.

"The weather was very pleasant, I enjoyed the race very much," he was quoted by local media as saying, as he crossed the finishing line, arms in the air.

The centenarian attributed his physical fitness to his healthy lifestyle, including abstaining from smoking and alcohol and to following a vegetarian diet, according to local reports.

The Guinness World Records has reportedly refused to accept him as the world's oldest marathon runner because he could not provide them with a birth certificate.

Singh claimed to be the first centenarian to complete a marathon after finishing the Toronto Waterfront event last October.

A record number of 70 000 runners took part in this year's Hong Kong marathon, which includes the full 42km marathon race, a half marathon and a 10 kilometre race.

A 26-year-old male runner collapsed after crossing the finishing line of the half-marathon race, and was certified dead after being sent to hospital.
Newer Post Older Post

This story makes me feel better about our lives if we all choose to become active. Thanks.

That is simple amazing!