Burglar killed in fall down stairs!!!

A 52-year-old was killed in a fall down a flight of stairs in the home he had broken into, according to the Spartanburg County Sheriff’s Office. 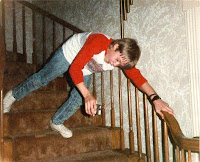 The coroner identified the man as Robert Edward Powell, 52, of Spartanburg.
Lt. Tony Ivey said that the home on South Blackstock Road was empty because it was undergoing extensive renovations. He said when a painter arrived at the home at about 8:30 a.m. Thursday, the worker found signs of a break-in, and broken glass inside the home, so he backed out and called the homeowner, who called 911.
Deputies arrived at the home about 8:45 a.m., and in performing a sweep of the home, they found Powell's body at the foot of the stairs in the basement.
Ivey said that there were no signs of anyone besides Powell having been in the house.
Ivey said vacant home are frequently targeted by burglars looking to steal fixtures, appliances or copper wire. He said due to the remodeling going on in the house, there were no appliances to take.
Ivey said Powell had broken into the home sometime after 5:30 p.m. Wednesday, the last time the homeowner was in the house.
The coroner said an autopsy will be performed Thursday night to confirm the specific cause of death, but he believes Powell was killed by the fall.
Ivey said, “It’s an unfortunate accident that happened during the commission of a crime.”
He said he was relieved it was not a random act of violence, but he said he still feels sorry for Powell's family.
Labels: 911, crime, Spartanburg County
Newer Post Older Post