Saudi Got Talent has no women or music :)

3:49 AM
Petar
A Saudi city known for its ultraconservatism has created its own version of the "Arabs Got Talent" television reality show, but with no music and women banned from taking part. 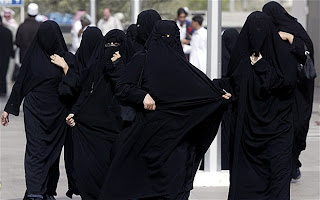 Instead, competitors will be permitted to perform religious chants, recite poems and engage in sports events.
The contest is being held north of the capital in the city of Buraydah, known as a centre for Wahhabism – a strict interpretation of Islam that is followed in the desert kingdom.
"Buraydah's Got Talent" is the title of the contest which will abide by the strict rules of segregation between the sexes, meaning it is not open to women.
Music, singing and dancing are strict no-nos, despite being staples in "Britain's Got Talent" and similar talent competitions that have become a global viewing phenomenon with national versions televised in 32 countries.
The Saudi version, organised by the internet Buraydah Forum, will take place in the open air before a jury comprising a poet, a television producer and TV presenters, Al-Hayat newspaper reported, quoting forum supervisor Jalawi al-Shukair.
source: telegraph.co.uk
Labels: Arabs Got Talent, Buraydah's Got Talent, Saudi
Newer Post Older Post