A Swiss police expert in dangerous animals gave workers a lecture after they evacuated the building because of a plastic spider. 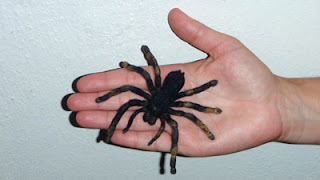 Police scrambled after a panicked report that a giant bird eating spider had been spotted on the boss's table at the firm in Chur.But when cops - including the dangerous animal expert - arrived they quickly realised the spider was a fake.Officers told staff at the firm that they would not be fined for wasting police time as the call had been genuine in it's intent.
But they made them sit through a 20-minute lecture on how to tell the difference between real spiders and plastic toys.
Labels: plastic spider, plastic toys, Swiss
Newer Post Older Post